These Tiny Boats Can Float Upside Down on Levitating Liquid 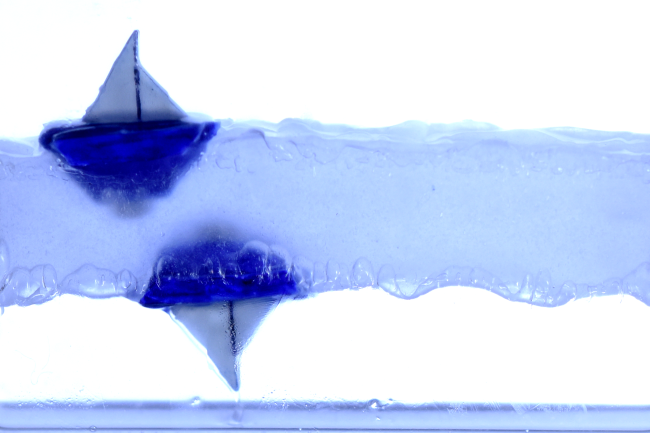 Seeing is believing — but the science behind this trick is more than meets the eye.

t might look like a magic trick, or an optical illusion of sorts. But no, your eyes don’t deceive you — that little boat you see above does, indeed, float upside down.

A good magician doesn’t reveal their tricks. Scientists, however, do the exact opposite. A team of researchers in France detail this phenomenon in a new study published today in Nature, showing how vigorously shaking a container full of silicone oil or glycerol can create a levitating pocket of liquid that allows these small boats to float upside down.

“These phenomena are so counter-intuitive,” says Emmanuel Fort, a coauthor on the study. “People who came to see the experiment in the lab thought it was a trick or thought it was science fiction,” like the levitating pools in the movie Tomorrowland. And the researchers themselves were also taken aback by the sheer strangeness of it all. Fort, a professor at ESPCI Paris and a researcher at the Langevin Institute, describes the research as “a succession of surprises and astonishment.”

How Strong Is King Kong? And Could He Even Stand Up?

‘The Code Breaker’ Is the Crispr Chronicle You Need to Read

How Many Microcovids Would You Spend on a Burrito?